The Supreme Court on Tuesday ordered Kolkata Police chief Rajeev Kumar to appear before the Central Bureau of Investigation (CBI) and cooperate with the probe.

According to Live Law, Kumar has been directed to appear before the CBI at a neutral place, Shillong.

26 people are talking about this

Chief Justice of India Ranjan Gogoi was quoted as saying by Hindustan Times, “We will direct the police commissioner to make himself available and fully cooperate. We will deal with contempt petition later.”

The top court, according to News18, also said that “no coercive steps, including arrest, shall be taken against Kumar”.

The Supreme Court bench also issued a notice to Kumar and sought his response before 20 February, the next date of hearing on the allegations by the CBI that he was tampering with electronic evidence and that the SIT headed by him provided the agency with doctored materials.

The CBI plea had alleged destruction of electronic evidence related to the Saradha chit fund scam case by the Kolkata Police commissioner.

The applications accusing Kumar of destroying evidence related to the case and indulging in contempt of court were mentioned by Solicitor General (SG) Tushar Mehta before a bench comprising Chief Justice Ranjan Gogoi and Justice Sanjeev Khanna on Monday.

West Bengal Chief Minister Mamata Banerjee, who has been sitting on a dharna since 8.30 pm Sunday, called it a “moral victory”. 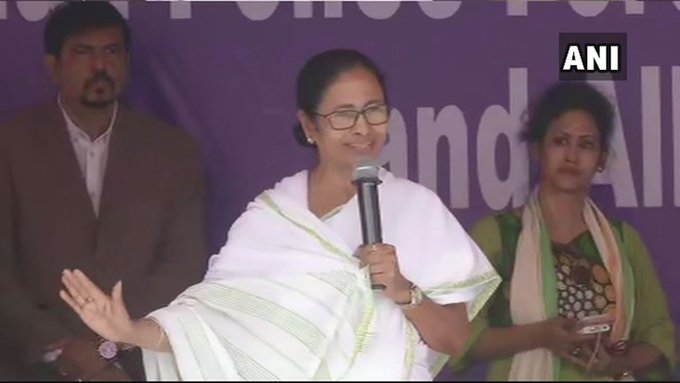 West Bengal CM Mamata Banerjee on SC order that no coercive steps would be taken against Rajeev Kumar: It’s a moral victory. We have great respect for judiciary&all institutions. We are so grateful. We’re so obliged.

301 people are talking about this
Source: HUFFPOST

Like Loading...
‹ Samsung Galaxy M series like smartphones coming soon to the offline market under A series
DCPCR to DoE: PUBG, God of War, Fortnite among games flagged as ‘harmful for brain’ ›