World’s First Robot Hotel Fires Half Of Its Robots 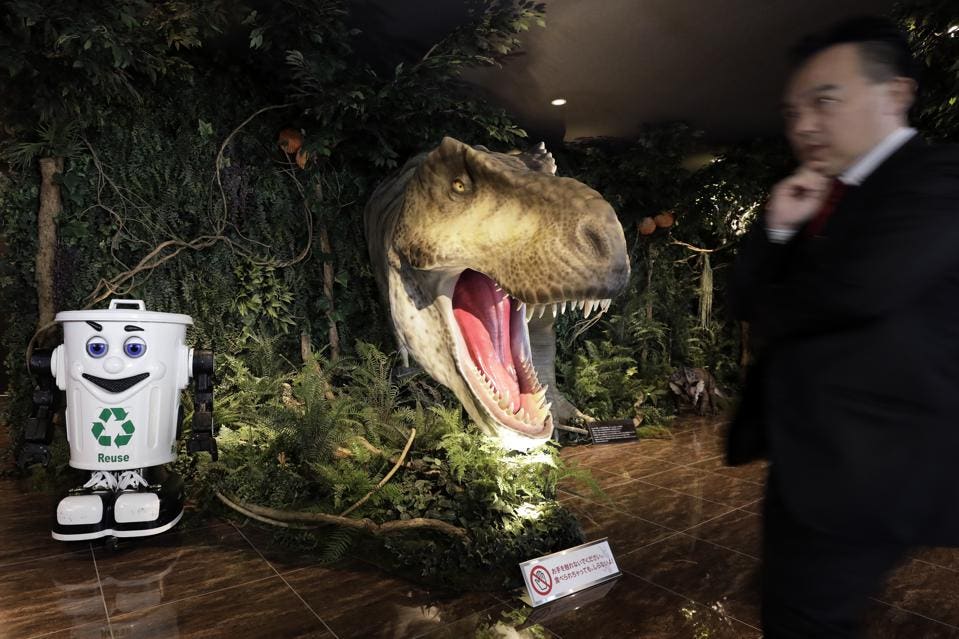 A model of a Tyrannosaurus dinosaur, center, and a robotic garbage can stand in the lobby of the Henn na Hotel Maihama Tokyo Bay, operated by H.I.S. Hotel Holdings Co., a unit of H.I.S. Co., during a media preview in Urayasu, Chiba, Japan, on Wednesday, March 15, 2017. The second robot-staffed hotel operated by H.I.S. opened on Wednesday. Photographer: Kiyoshi Ota/Bloomberg© 2017 BLOOMBERG FINANCE LP

A robot hotel in Japan has culled more than half of its robotic workforce since it launched, according to a report from The Wall Street Journal on Monday.

The Henn na, or Strange hotel, made headlines when it opened in 2015, with the Guinness Book of World Records officially recognising it as the world’s first robot hotel.
However, more than half of the hotel’s 243 droids have reportedly been fired as they were creating more work than they were achieving.

“It’s easier now that we’re not being frequently called by guests to help with problems with the robots,” one staff member reportedly said.

The hotel initially hoped that the robots would help it to overcome a labour shortage in the rural area that it is based. It wanted to use the robots for everything from stirring cocktails to answering a plethora of guest queries.

But the robots were not advanced enough to perform many of the tasks that it wanted them to do.

Guests became frustrated when their in-room robot “Churi,” which lagged behind other AI assistants like Siri and Alexa, failed to answer their questions.

One guest was reportedly awoken every few hours because a robot thought he was asking it a question when he was in fact just snoring.

There has been one successful robot, according to the report. A huge mechanical arm that puts luggage into storage boxes and retrieves it again.

Like Loading...
‹ Australia could suffer the biggest property price falls in the world this year
How Business and Politics Intersect in India’s Porous State ›